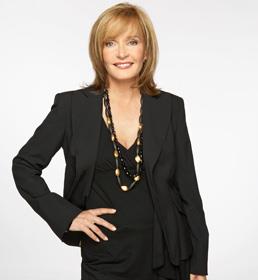 Best known as host of the popular daily talk show CityLine and co-host of 104.5 CHUM FM’s Roger, Rick & Marilyn, Marilyn Denis, without question, is one of the busiest women in broadcasting.

Marilyn’s weekday mornings are hectic, as she begins her day at 6:00 a.m. at CHUM FM, a position she’s held for over 21 years. Then she zips to Citytv to host CityLine, just one hour later! Now in it’s 18th season with over 3,700 shows completed, CityLine features expert advice and commentary on food, entertainment, home, garden, health and fashion.

In addition to CityLine and CHUM FM, Marilyn also shared hosting duties of Bravo!’s Gemini award-winning concert series Live at the Rehearsal Hall and the international music interview program Music Online. Throughout her distinguished career Marilyn has interviewed the best in the business—from Harrison Ford to Shania Twain, Paul Anka to Sting and Beyoncé to Oprah Winfrey.

Earning numerous accolades throughout her career at CTVglobemedia, Marilyn recently received back-to-back Viewers Choice Awards at the 2005/2006 Gemini Awards. She also picked up the 2005/2006 Toronto Sun’s Reader’s Choice Award for Favourite Local TV/Radio Personality. In March 2006 Marilyn was presented with The Rosalie Award, honouring Canadian women who have paved the way for others in radio broadcasting (inspired by the legendary Rosalie Trombley). Most recently, Marilyn and CityLine received 2007 Geminis for Best Host in a Lifestyle/Practical Information or Performing Arts Program or Series and Best Lifestyle/Practical Information Series respectively.

Born in Edmonton and raised in Pittsburgh, Marilyn began her career in broadcasting as the first female DJ at a commercial radio station in Moscow, Idaho while attending the state’s University. After moving to Calgary’s CHFM, she broadened her experience as a DJ and took on new challenges as Assistant Programmer & Music Director for the station. She later joined CJAY 92 as an announcer and traffic reporter while also reporting on sports, weather and entertainment at CFCN-TV and working as a freelance reporter for TSN.

Marilyn is involved with many different charities. An advocate for the fight against ovarian and breast cancer.